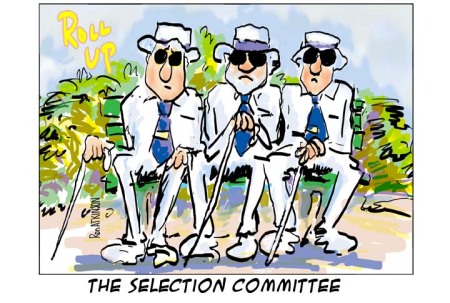 The Wailing Wall (or the Club Selection Board)

They beat their breasts and cried out loud,
As they faced the western wall,
Where the selectors had placed the team selections
On the notice board was their call.

There were some that swore and some that cried,
And some who stood and muttered
Some were proud, some were coy,
And others merely stuttered.

There were voices raised in anger,
Shrill screams split the air,
There were those who didn’t say a thing,
Because they really didn’t care.

“I wont play with him”, one said,
“He’s a bloody hopeless skip.”
And one who very quietly said,
“It’s time I took my trip.”

There were many self selections,
There were lots of “bloody hells!”
There weren’t very many
who said the Selectors had done well.

The players knew who should be there,
They knew who to pick,
Just ask them when you hear them say,
“That selector is a $$##@!.”

Each year the tears get deeper,
As on the floor they fall,
From those who stand in anguish
Before the wailing wall.